10 Charts Summarizing where we’re at:

We just watched the worst infectious disease in a long time bring the world to its knees, an incumbent US president unseated for only the 3rd time in 43 years, and the US stock market hit a record high while the rest of the economy officially tumbled into recession.  Makes sense.

Volumes will be written about 2020, but not today, and not in this newsletter.  Instead, let’s go ‘round-the-economic-world-in-60 seconds, summarizing 2020 in a couple charts to better understand where we are and where we go from here.

Gross Domestic Product is always the starting point as it’s the closest singular measure of our nation’s total economic output:

From that perspective, it doesn’t look all that bad – slow and steady growth up and to the right, with occasional setbacks along the way (vertical gray bars are recessions).

To understand whether GDP is speeding up or slowing down, it’s reported each quarter in terms of annualized rate-of-change.  A normal quarterly number is somewhere in the 2-4% per-annum range.  But this year, we smashed ‘normal’: 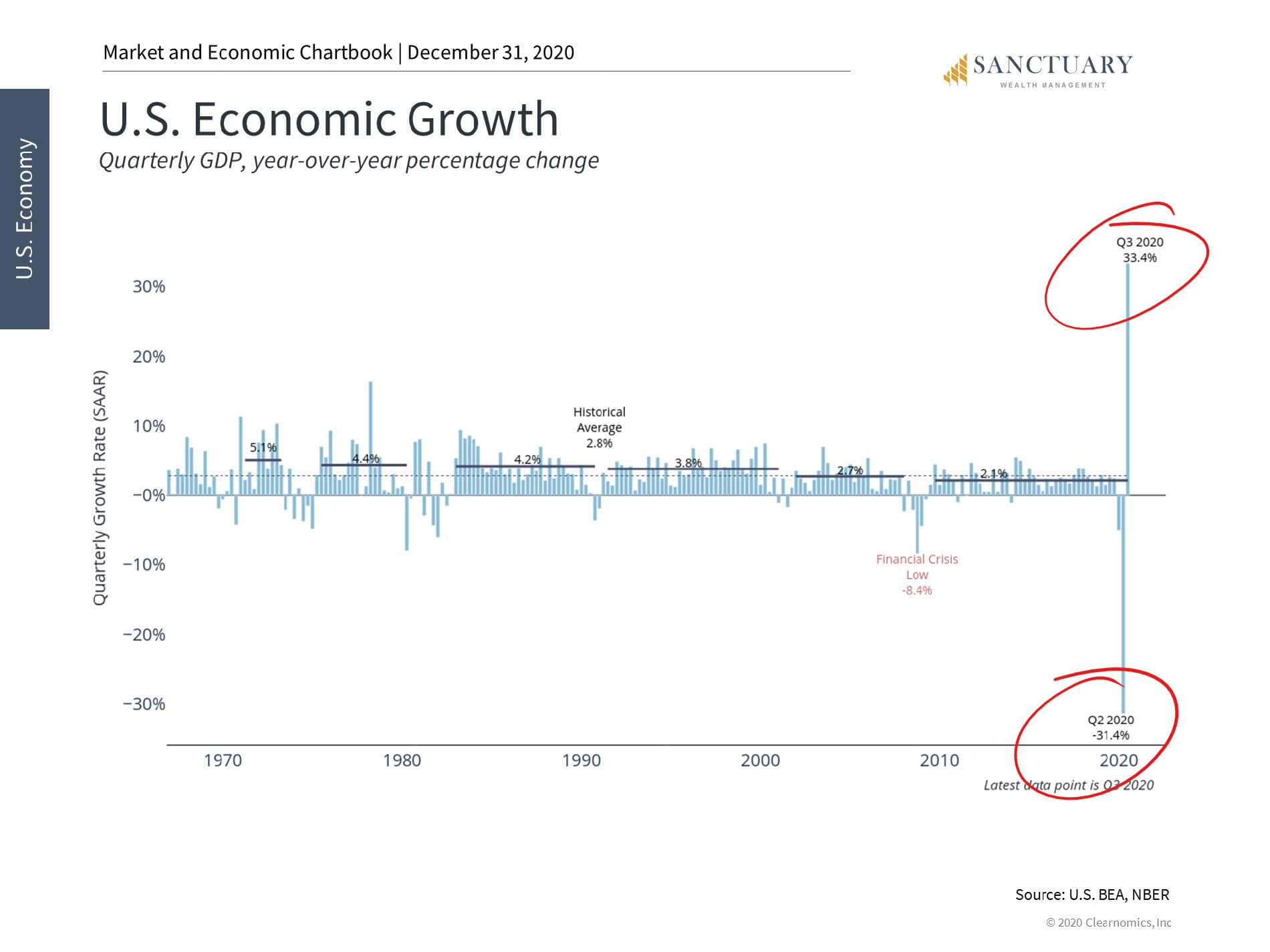 One of those is awesome; the other, not so much.

Back to this chart showing total economic output:

Despite the Q2 bloodbath, we’re almost back to where we once were in terms of total GDP.  Some back-of-the-envelope math shows we need about 3.5% total growth in the next 12 months to get back to 2019 levels (and that chart is delayed 3 months…we may already be halfway there). We’ll never recover the production lost from 2020, but we’re not as far off as you might think, either.

As I talk about so often, one person’s spending creates another person’s income, and people can’t spend if people aren’t working.  So hence, why employment/unemployment is watched so closely.

Here’s how many folks we have productively working in the US right now:

But that’s still 10,000,000 jobs missing, which caused unemployment to spike to the highest levels in post-WWII history: 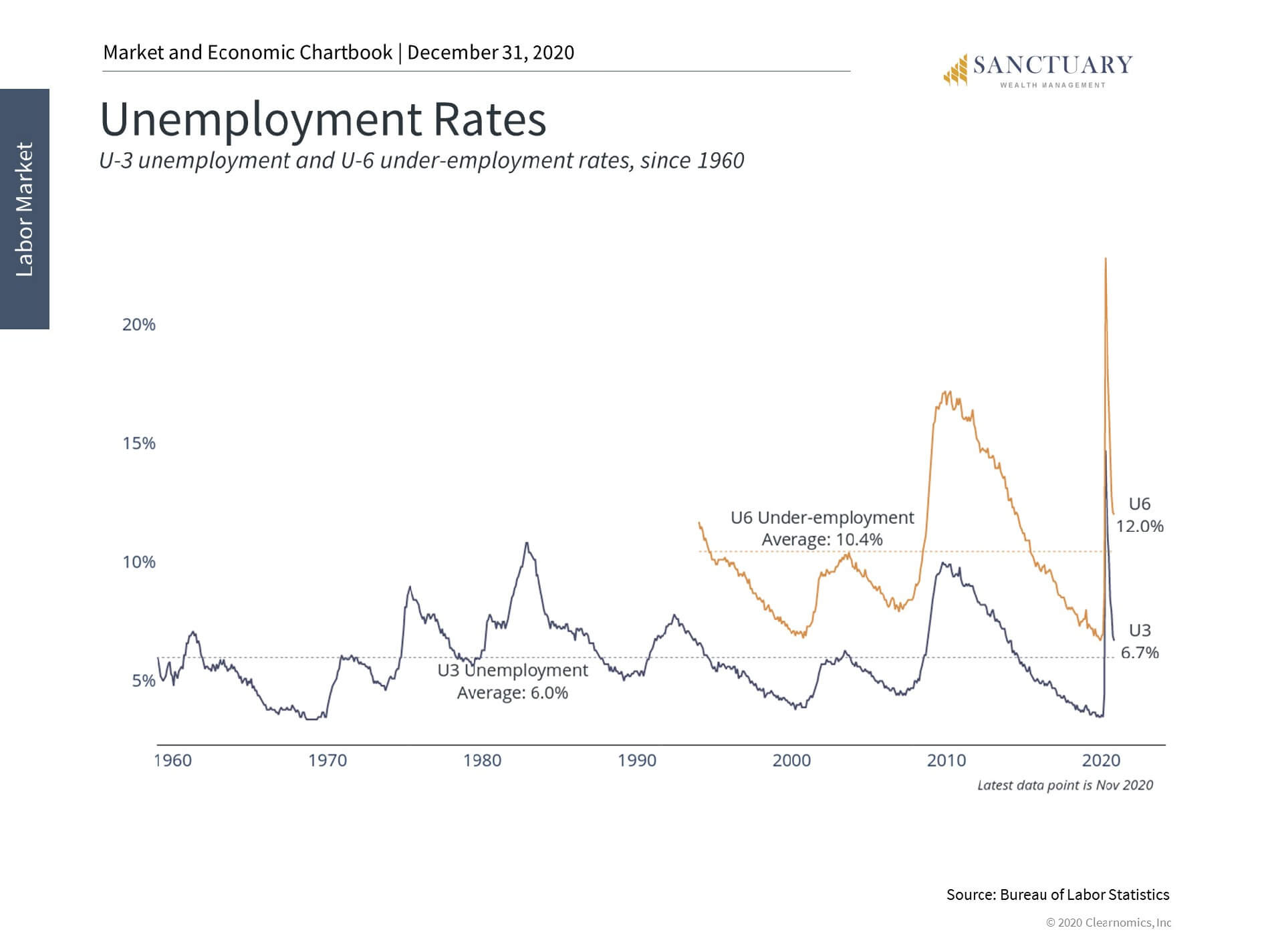 BUT, I’ve been saying for a while that we can’t rely on unemployment data right now because the new enhanced federal unemployment benefits from the COVID stimulus bill created a strangely perverse economic incentive.  The calculus worked such that the federal government would effectively pay a $10/hour employee $20/hour if he/she would layoff and stay home for a while (think of the millions of front-line customer service employees in retail, restaurants, hotels, etc).

Think about the economic decision-logic here: if all you had to do was layoff, hop online to file for unemployment, and double your hourly rate, wouldn’t you?  Of course you would!  Which is exactly what happened: 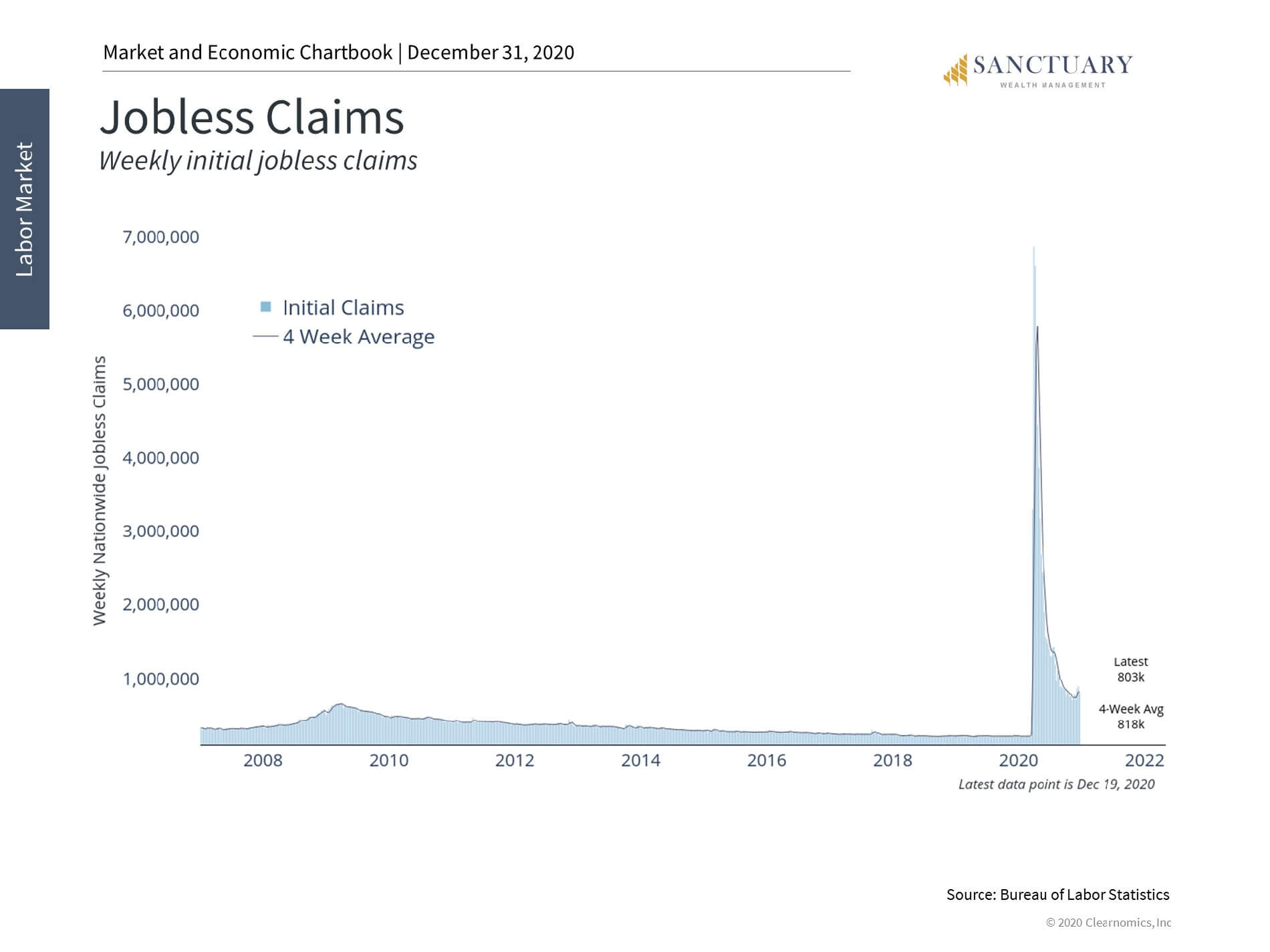 Pre-COVID, we were pacing ~200,000 new claims for unemployment each week.  Back during the 2008/2009 recession, we hit a recent-history high of ~600,000 claims per week.  How did it look that first week in late March 2020 after the federal enhanced unemployment benefits went live? 6,800,000 claims, a 3,300% increase in one week.  We obliterated another economic record and completely reset the measurement scale.  Behold, the power of economic incentives.

But perhaps surprisingly, there are still plenty of jobs available for those willing: 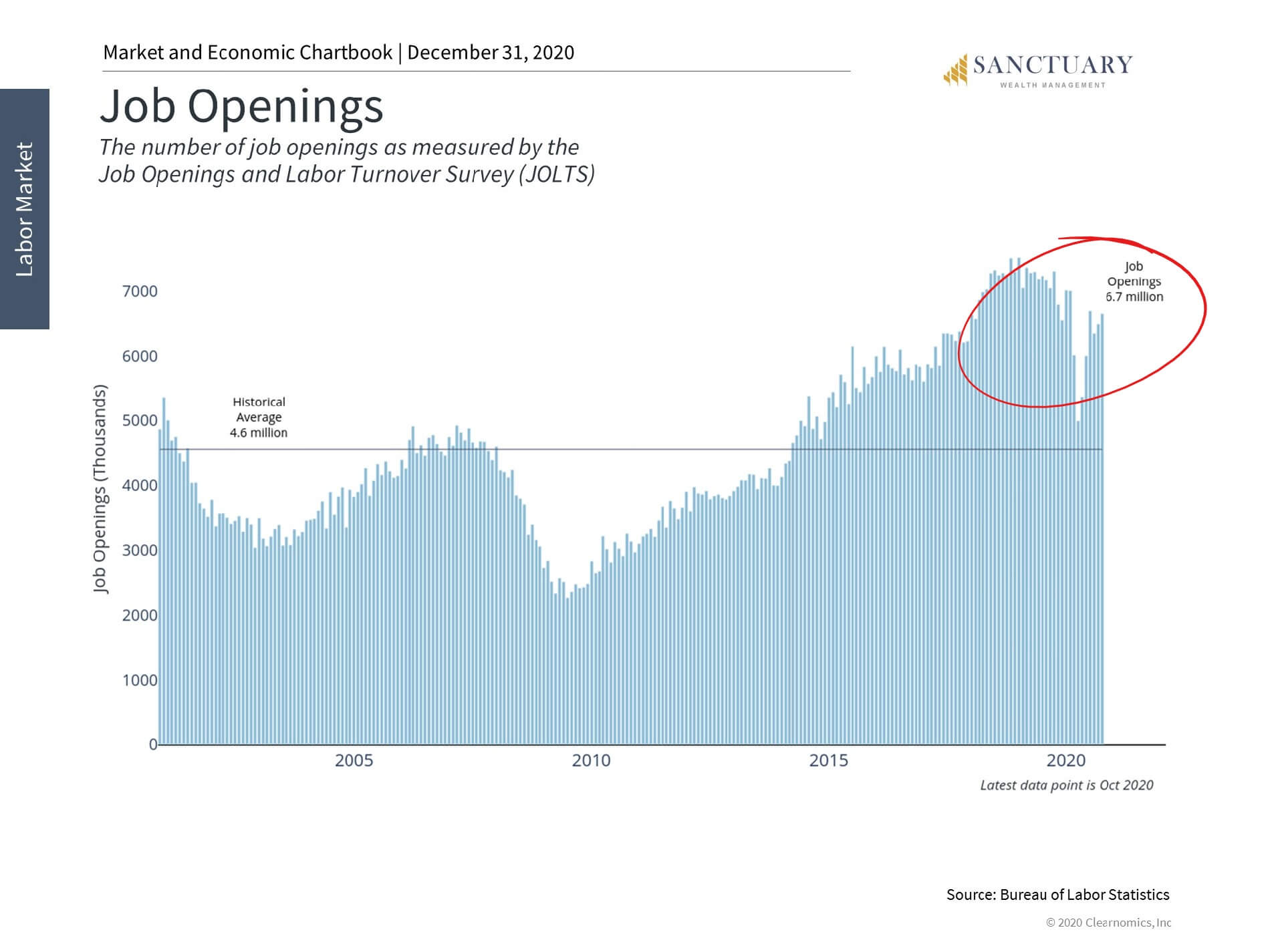 But it’s hard for businesses to compete for labor when the federal government is paying folks a premium to stay home.  So long as we have enhanced unemployment benefits, we’ll have ‘enhanced’ unemployment data as well.

As lockdowns ease and enhanced benefits conclude, you’ll see those unemployment numbers continue to come back down, though perhaps not back to the ~200,000/week pace for a couple more years.  Unfortunately, we’ve turned a lot of small-businesses into out-of-businesses in the last couple months and it will be a bit before we get those jobs back.

Hoping to avert a catastrophic recession – in an election year, nonetheless – Congress opened up their our checkbook like they never have before: 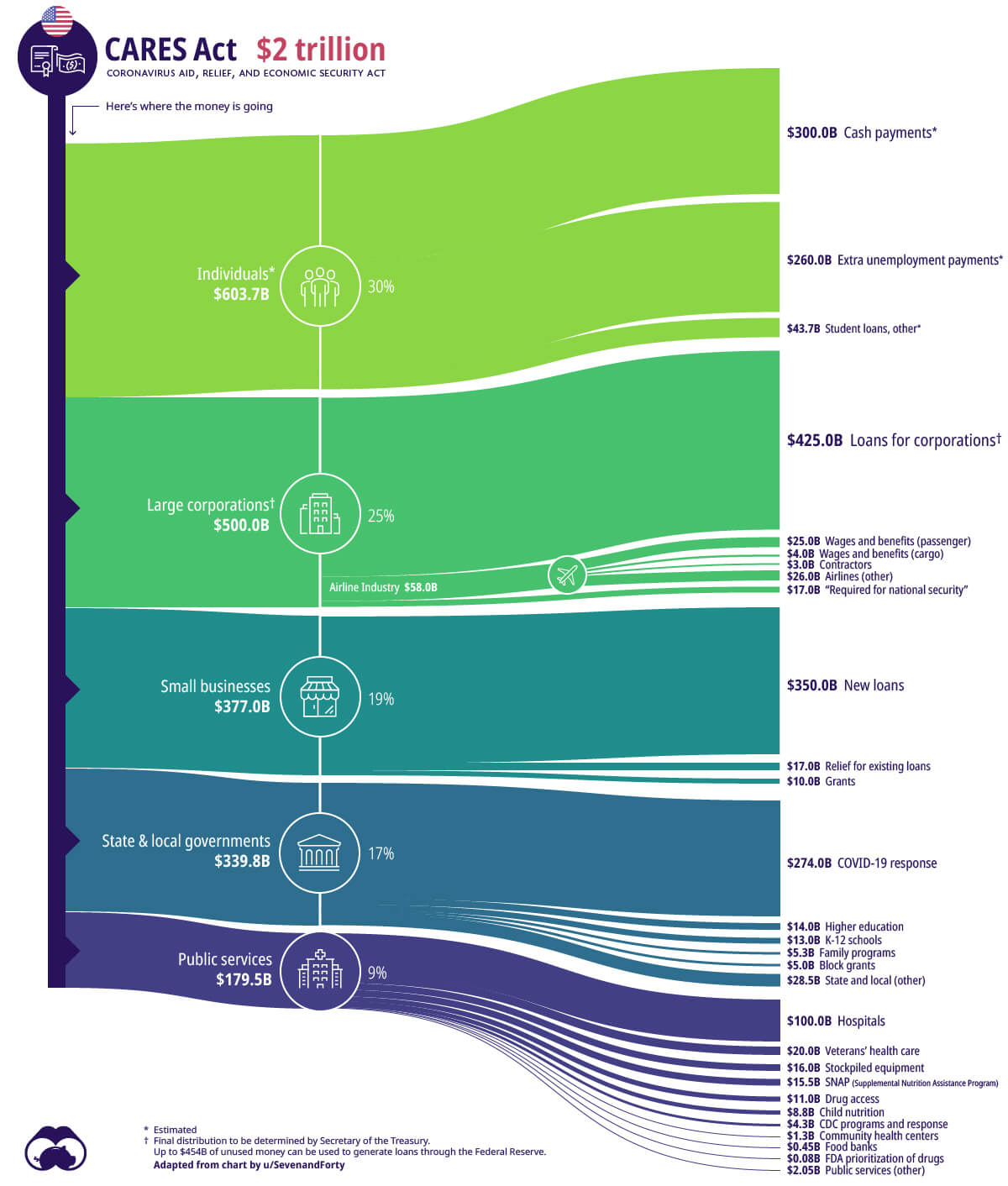 Unfortunately, I think many US citizens think this means Congress dipped into their treasure chest of gold coins to pass out all this stimulus money.  It doesn’t.  Congress doesn’t have this money, so they borrowed it:

We’ll smash another (not good) record this year for deficit spending: over $3 trillion (yes, trillion, with a T) in one year.  This adds to our previous accumulated deficits, which sums to our total national debt:

Close to $28 trillion (again, trillion, with a T) to be paid back at some future time.

Now, before you worry that we’re just going deeper and deeper in debt to foreign governments…..we’re not.  Most of our debt – about 74% – is owned by US investors: 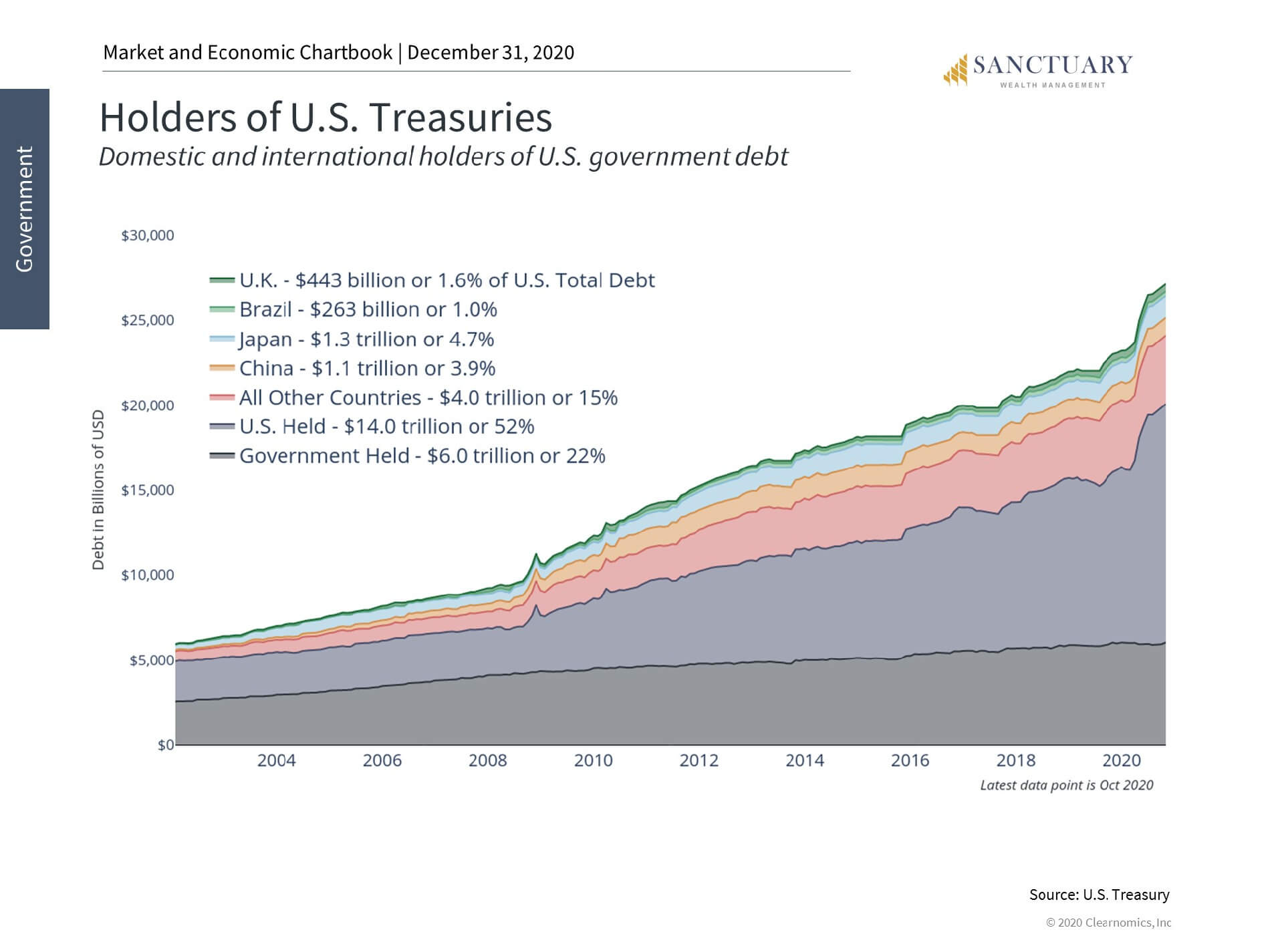 Take off your tin-foil hat.  We’re not going anywhere.  If we default, we default to ourselves. 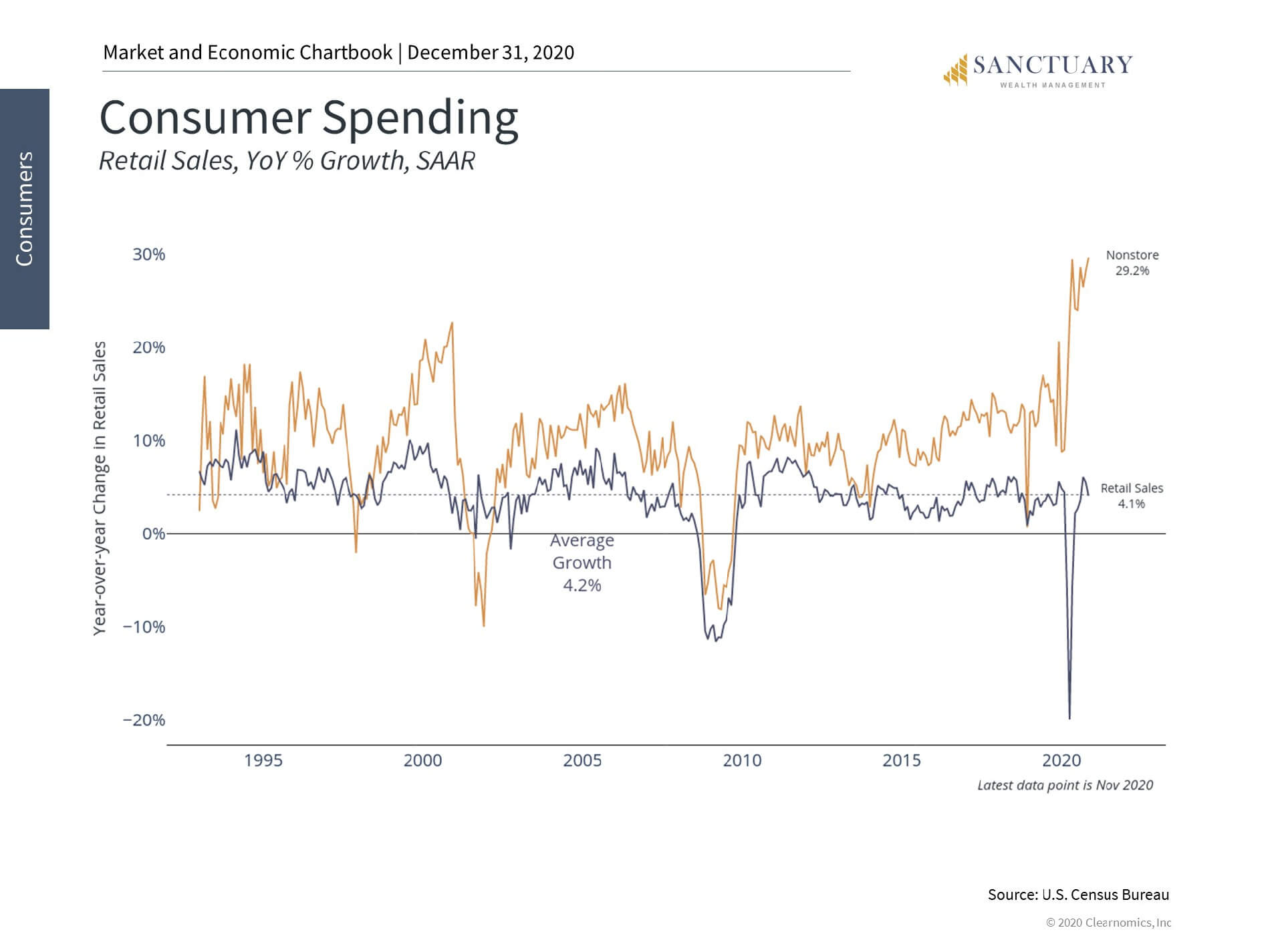 And not just on retail goods, but houses too: 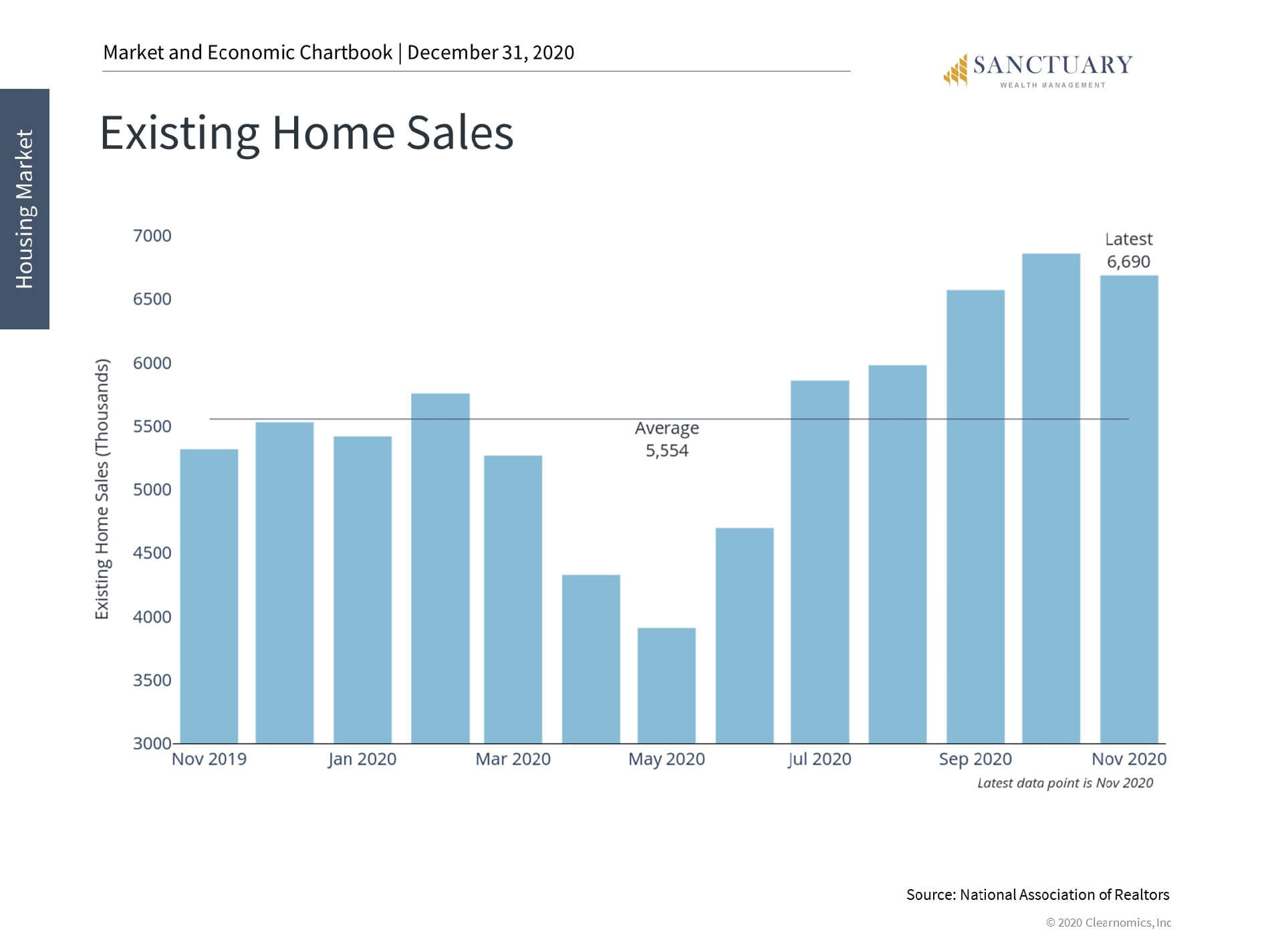 Anyone try and buy a new camp trailer, ATV, motorcycle, mountain-bike, boat, or other similar outdoor-recreational item this year?  With so many traditional forms of leisure closed (sporting events, movie theaters, concert venues, vacations, etc), consumers turned to the out-of-doors to recreate.  Lakes were packed, campgrounds were full, and Yellowstone National Park recorded the highest-ever number of visitors this last autumn[1].

And despite robust spending, consumers (in aggregate) actually increased their savings a bit: 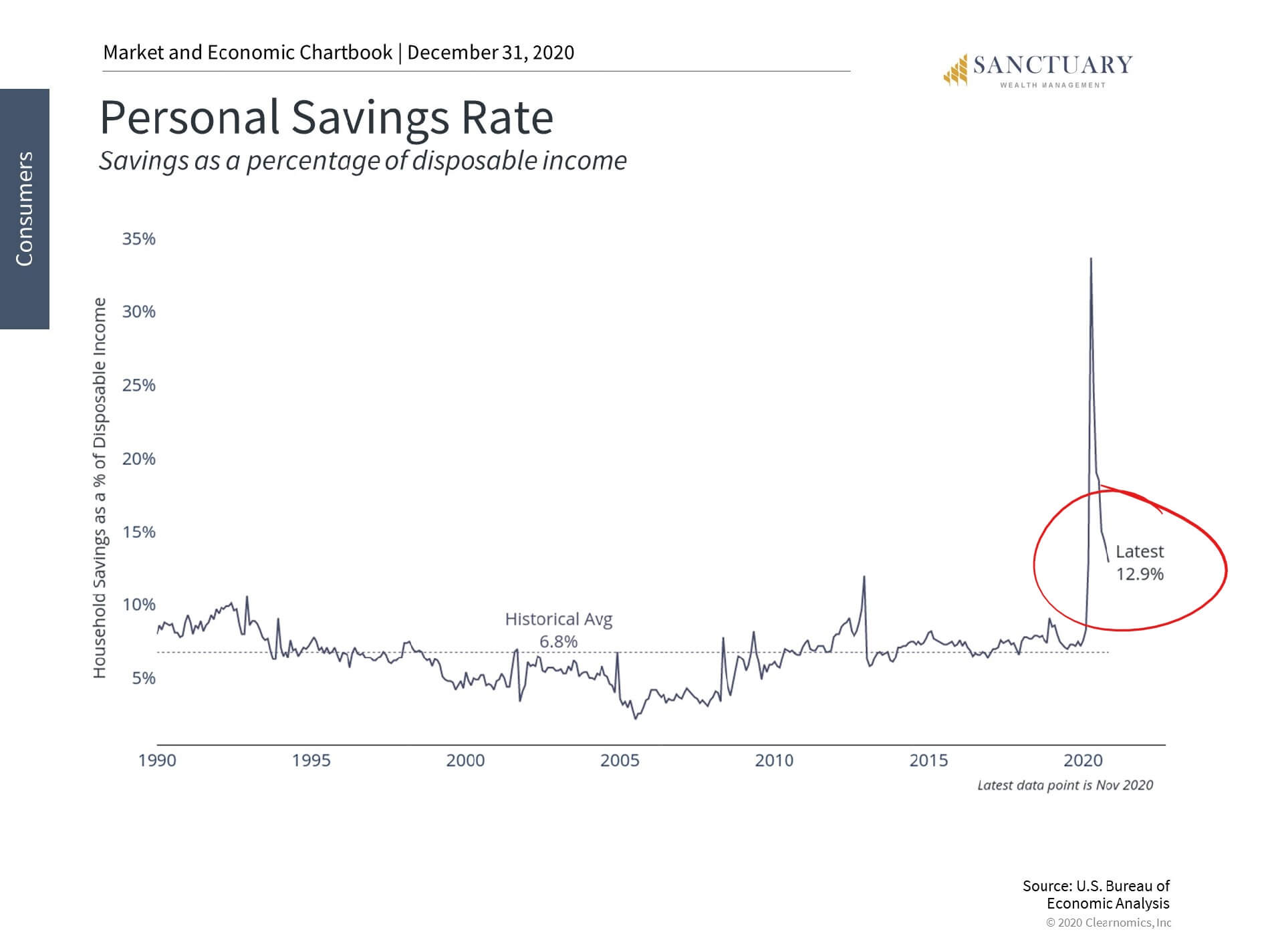 Similar to Congress’s response (and arguably, faster), the Federal Reserve joined the COVID response by mashing the interest-rate gas pedal to the floor, dropping interest rates to zero across the board:

And although the Federal Reserve does not directly set mortgage rates and auto-loan rates and such, all other lenders essentially piggy-back off the Fed rate, which is great news if you’re borrowing money: 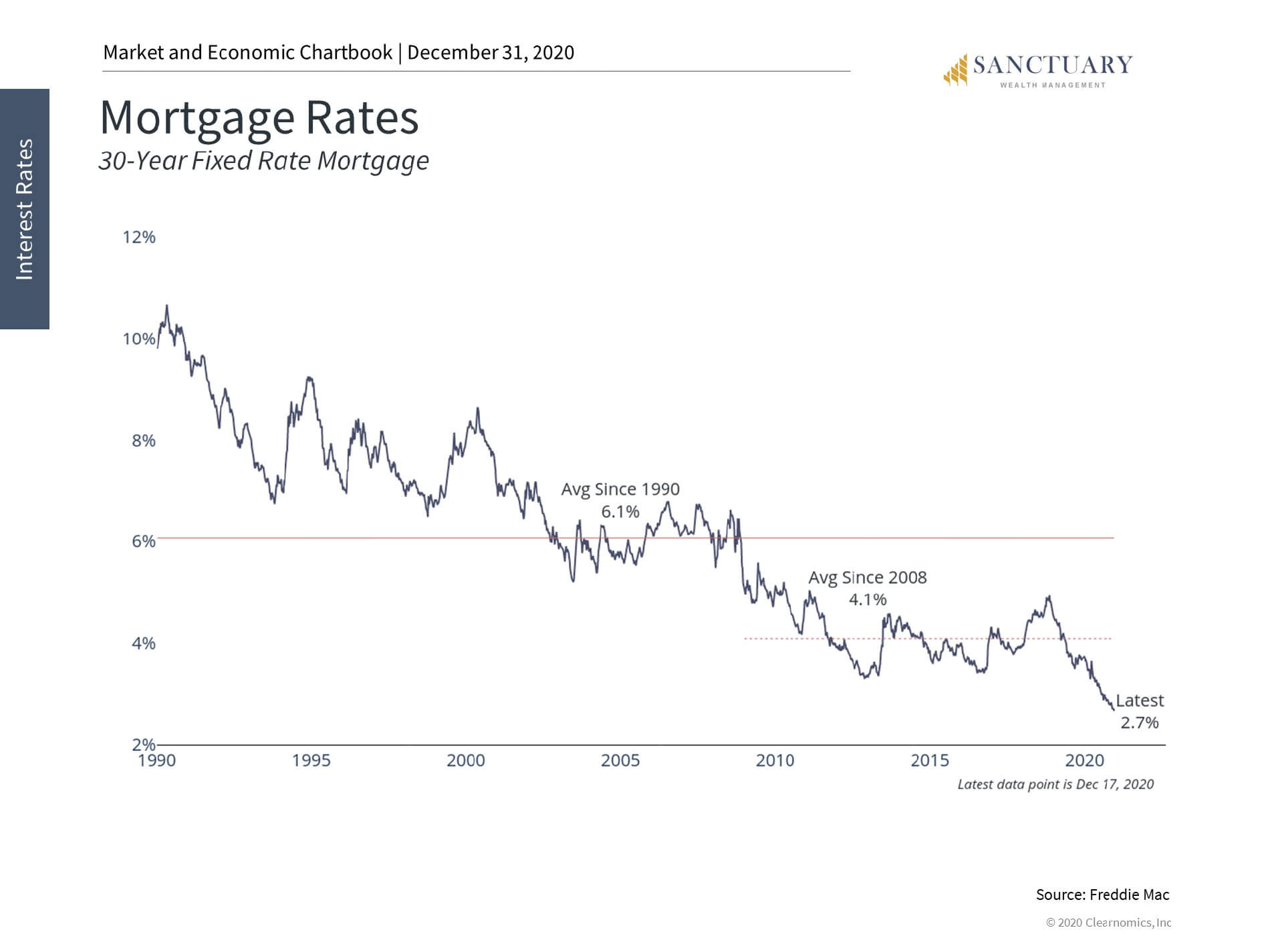 But horrible news if you’re trying to save money: 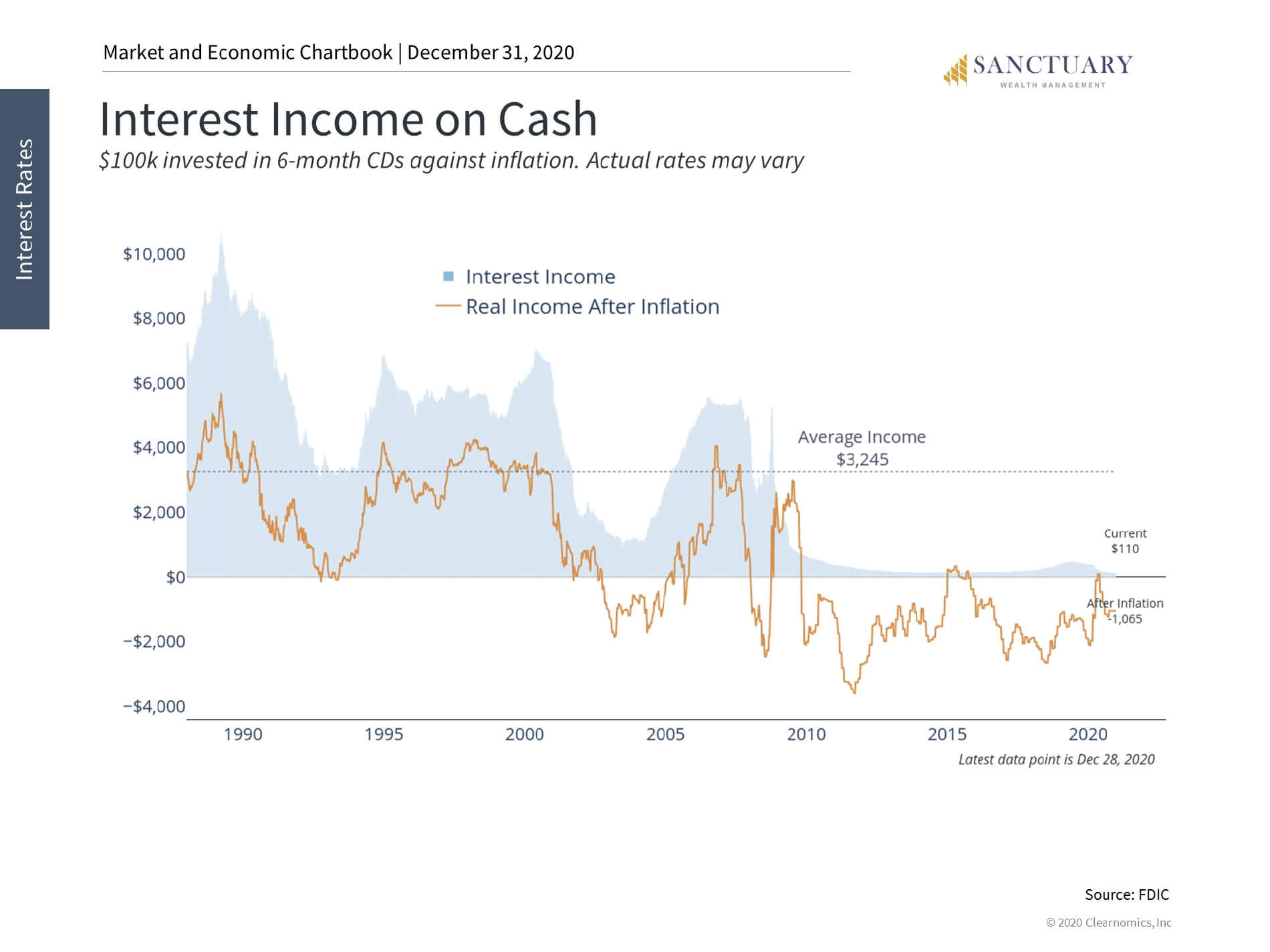 Furthermore, the Fed has repeatedly and publicly made it clear they have no intention of raising rates anytime before 2023: 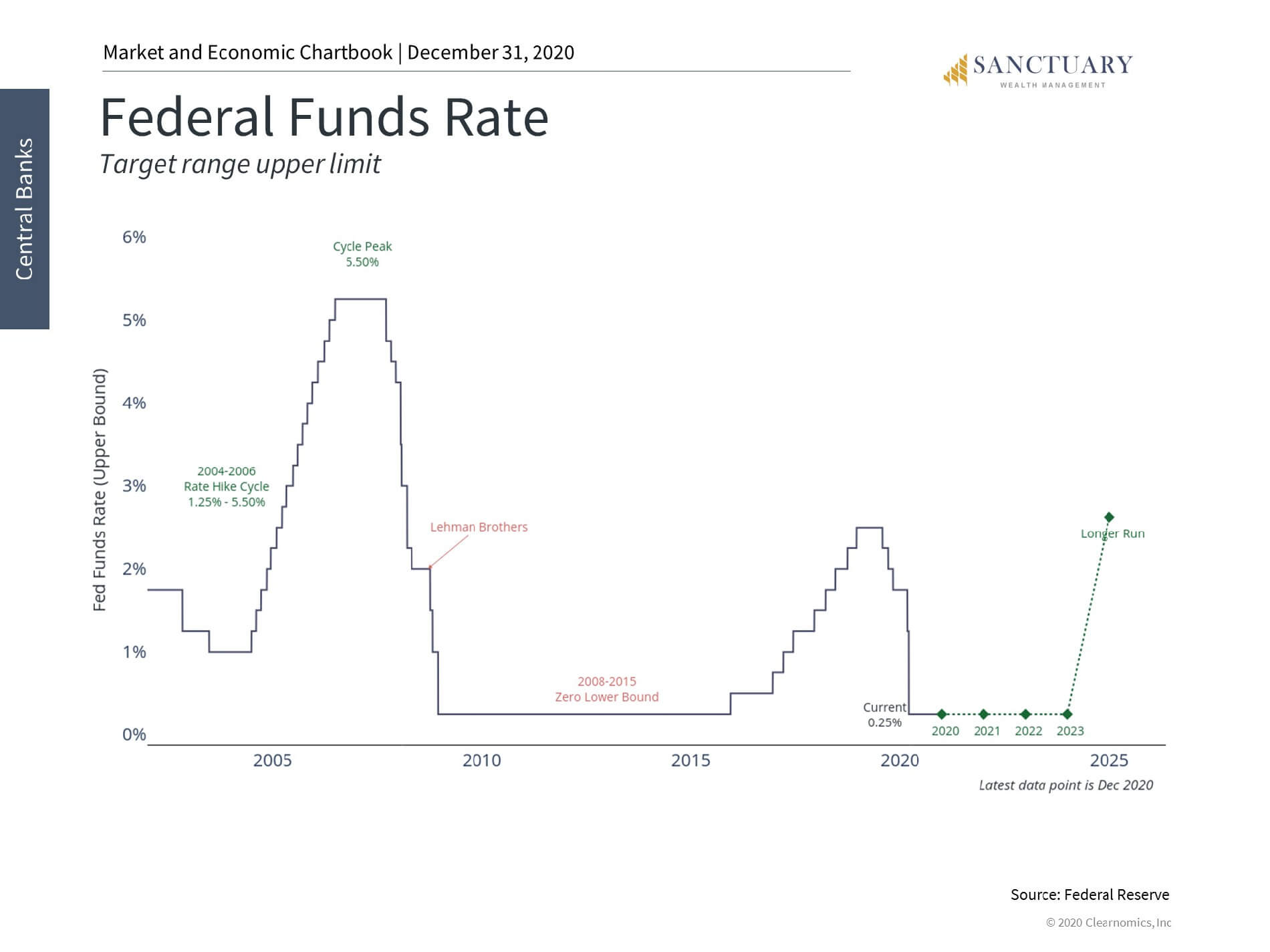 We’ll be in a low-interest rate world for a while to come.  Bad news for savers, good news for borrowers.

With bonds and fixed-income instruments paying such low returns for a while to come, where else can an investor go for return? Turns out, investors headed over to the equity markets in 2020 looking to put their money to work: 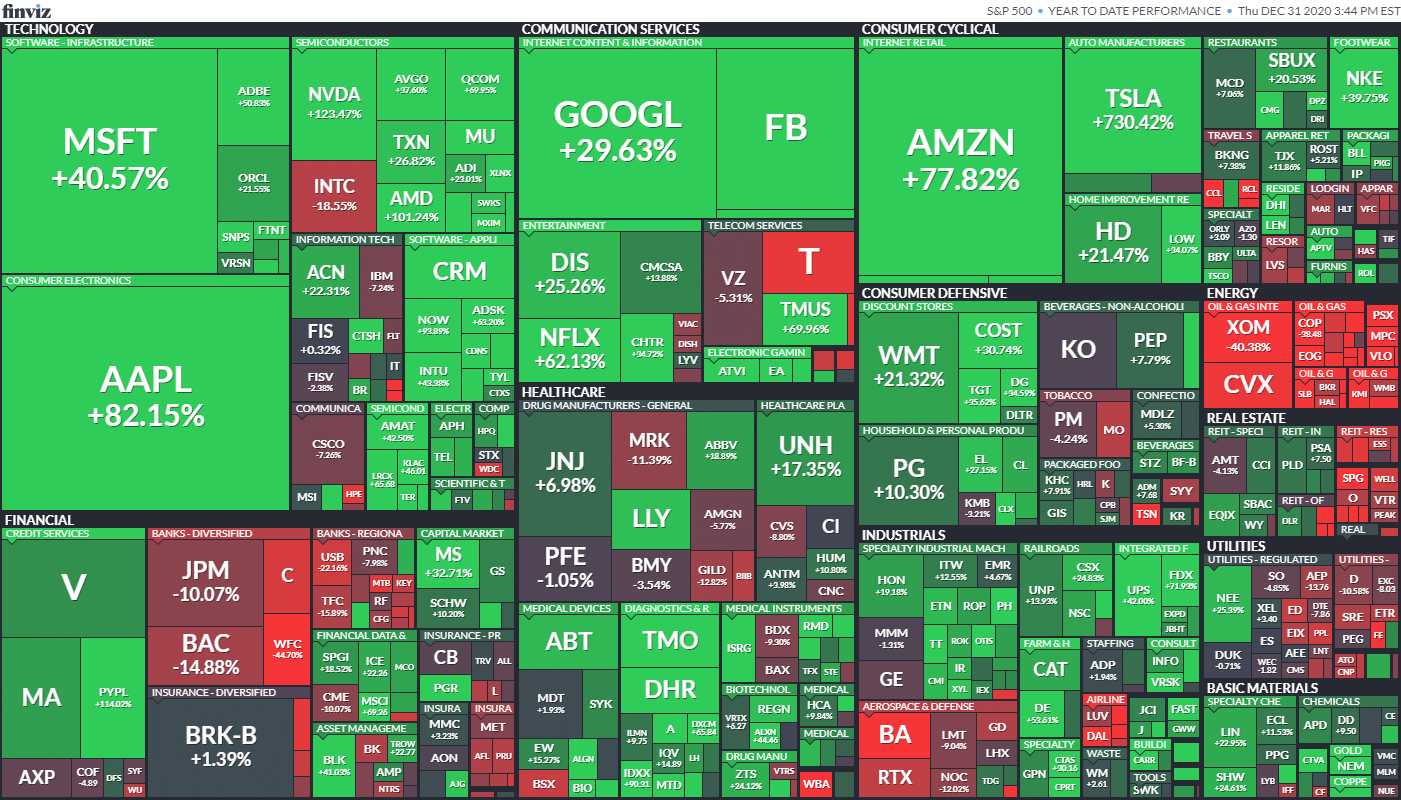 Those are year-to-date returns of the 500 largest companies in the US, showing COVID largely split the macro-economy into two groups:

Sounds like easy money, but valuations (defined by price/earnings) are getting a bit stretched: 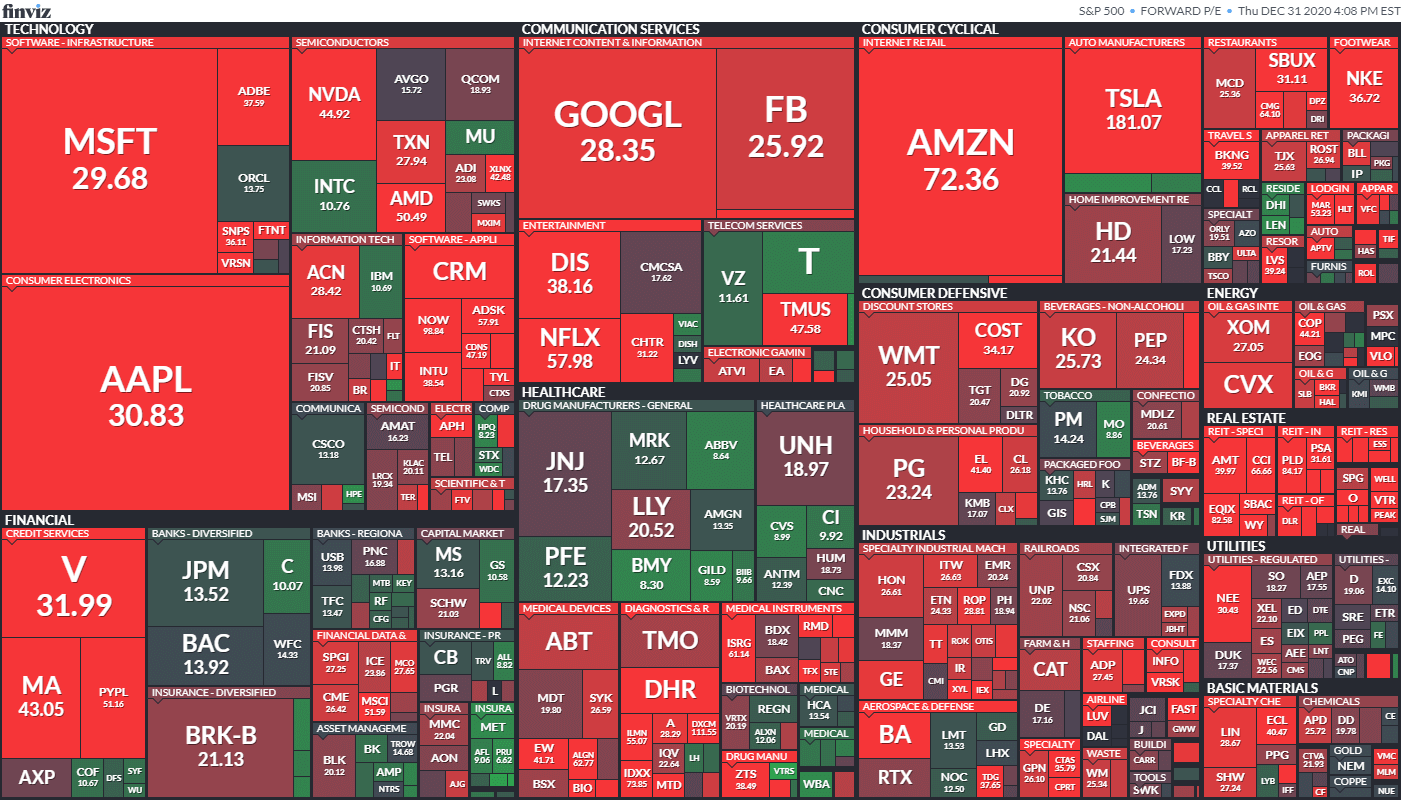 As lockdowns ease and life begins to normalize, look for the stuck-at-home economy to cool and traditional face-to-face industries to return to life.

I think many of us have a long-running case of cabin fever – ready to be free to travel, vacation, go to a game, movie, or concert, and eat in person at our favorite restaurants again.  There is a lot of pent-up demand, and once those activities are green-lighted again, economic rewards will go to those well-run companies who step up and profitably service consumer demand. 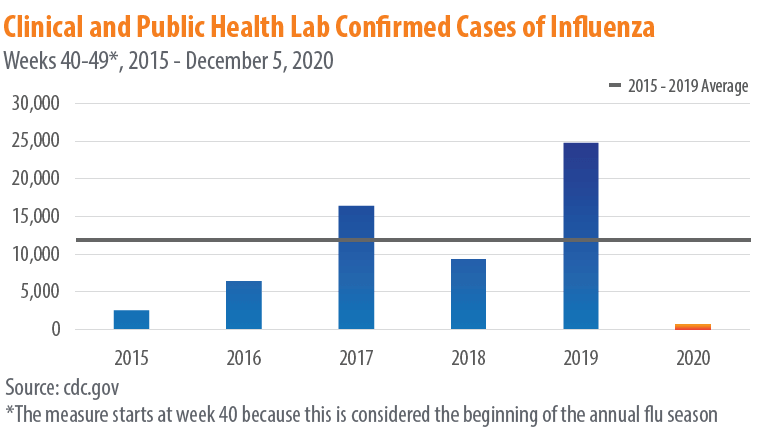 Also, in case you missed it, the year 2020 also saw wild polio virus eradicated in Africa, the 2nd person cured of HIV/AIDS virus, and a breakthrough in mRNA vaccine technology (developed for the COVID vaccine), which may also be used against other nasty conditions (perhaps even cancer someday).

If 2020 has taught us anything, it’s that the future – by its very nature – is unknowable, which is why it is called news.  We hope for the best, and plan for the worst, knowing real-life will be somewhere in the middle.  This really isn’t a new lesson, but 2020 perhaps brought it back into focus.

When the clock strikes midnight tonight, and tomorrow, January 1, 2021 comes, we will finally be factually correct when we say “hindsight is 2020”. 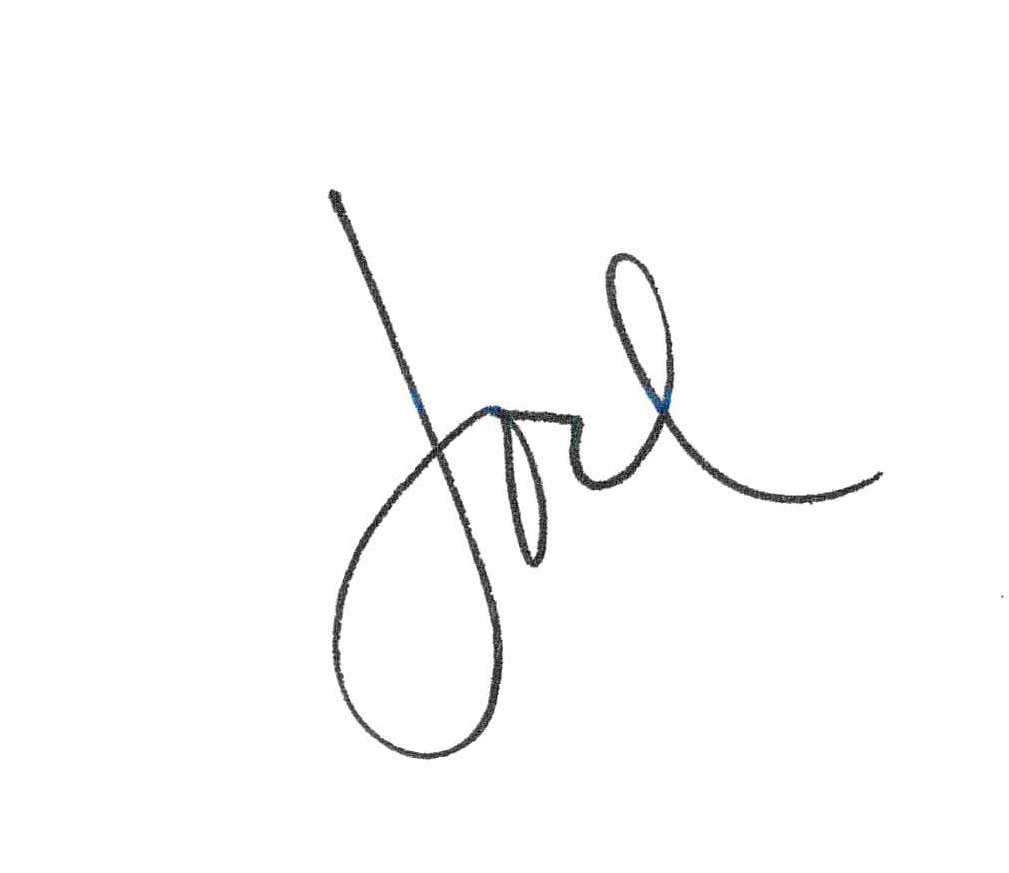 * * * * *
(That was a mile-wide-inch-deep whirlwind summary of where we’re at.  I could go much deeper on each of those, but let me know if there are specific topics you’d like me to tackle in the new year.)