What Is Bitcoin? And Why Is It Up 143% Already This Year? 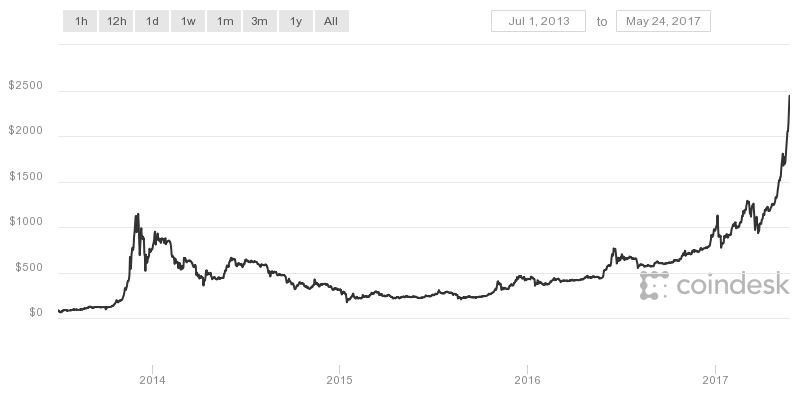 To the first question: What is BitCoin?

BitCoin is simply a new form of money.  When I go to the store and purchase groceries, the merchant expects me to pay with cash, card, or check, all denominated in US Dollars.  When I do the same in Mexico, I pay with Mexican Pesos.  When in Japan, I pay with Japanese Yen, and so forth.  BitCoin, though not tied to any specific country (more on that later), is simply another form of currency I can use to buy and sell things.  That’s it: it’s simply a form of money, a medium of exchange, just like US Dollars, Japanese Yen, or Mexican Pesos.  Except it doesn’t exist in physical form: there are no BitCoin coins or bills – just bits and bytes stored on computers (more on that later).

BitCoin was created in 2008 and has been traded back and forth since then, but it’s use has really exploded over the last 12 months or so.  Here is an excellent primer on the basics of this new form of currency:

There are many great articles explaining BitCoin’s background, what’s gone really wrong (here and here), and what it may look like in the future.  I don’t want to rehash those here, but rather emphasize two unique characteristics which make BitCoin worth paying attention to as the technology develops:

Let’s back up a bit.

When investing, there are 4 major asset classes (or food groups):

BitCoin fits into that last bucket as a new type of currency, or money.  Unlike stocks, which produce dividends, or bonds, which produce interest, or farmland, which produces yield, currencies produce nothing.  Currencies don’t produce any value – they can only store it.  A currency is only worth what someone else is willing to pay for it in the moment.  Thus, a currency’s value is determined by classic supply and demand: if supply is fixed and demand goes up, so does the price; when demand goes down, so does the price: 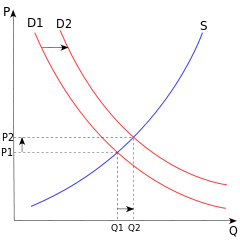 Back to BitCoin.  It’s supply has been relatively steady (and will eventually cap out), but demand has skyrocketed over the last couple months.  Some of this is due to it becoming a more commonly accepted payment method, and a lot of it is coming from investors buying it for speculation.  For whatever reason (conspiracy or otherwise), almost 100% of BitCoin trading volume is coming out of China.

Furthermore, we need to keep size in perspective.  Even with it’s recent price explosion, the total value of BitCoin in circulation is about $39 billion – less than the total market value of Ford Motor Company.

As far as what direction it will go in the future, there are plenty of voices in either direction, with one prominent investor predicting BitCoin will eventually go to $500,000, with another predicting that when they crash, it “will make the dotcom bubble look like an appetizer.”

So, should I own it?

Depends.  I personally exchanged a couple thousand of my US Dollars for some BitCoin to better understand the currency[2].  And so far, the position only seems to move in one direction – straight up.  I’m up ~28% in just a short time frame.  BUT, anything that can move that far, that quickly, can easily go the other direction just as fast, which I’m fully anticipating on my next statement.

To give you an idea of the stomach-churning volatility with BitCoin, let’s compare it to the general US stock market[3]:

And as dizzying as that is, BitCoin is actually one of the more stable digital currencies: DigitalCoin is off 97% from it’s all time high, ZClassic lost 70% of it’s value last week, and iCash has lost almost 50% in the last 24 hours[5].  These don’t sound like reasonable investment propositions; they sound like modern-day pump-and-dump schemes.  To it’s credit, BitCoin seems to have more staying power than the rest, but the entire asset class reminds me of the gold-rush of the 1800’s: some will go big, but most will go broke.

So, if you’re into trading your hard-earned, tangible, stable US Dollars for some electronic marks on a screen which carry neck-snapping volatility with them, go for it (I did).  But otherwise, standing aside and waiting for this new digital currency to either mature and stabilize, or shrivel up and vaporize, is probably more prudent.

(Some cocktail trivia for your Memorial Day gatherings this weekend: The first documented BitCoin purchase occurred 7 years ago this week (May 22, 2010) when Laszlo Hanyecz, an American computer programmer, purchased 2 Dominos pizzas from a friend for 10,000 BitCoin.  These 10,000 BitCoin were worth about $41.00 at the time.  Today, those same 10,000 BitCoin would be worth $24 million – perhaps the 2 most expensive pizzas ever.)