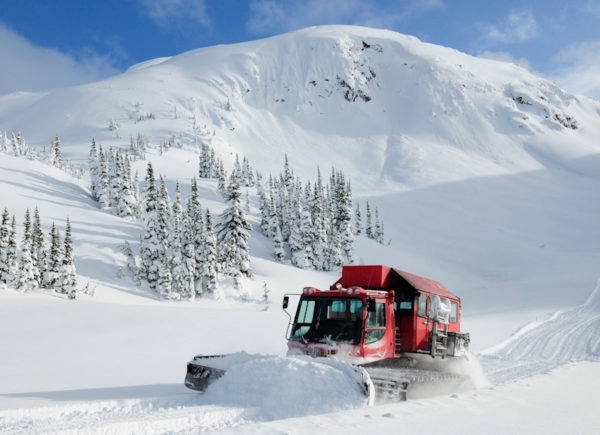 Last week I was having dinner with a man who sells SnowCat machinery to ski resorts and large corporations who need them for backcountry use in the winter.  He was telling me of an unusual project they were currently working on where they had been hired by ExxonMobil to retrieve one of Exxon’s SnowCats that had become stuck in the backcountry.

While checking on pipelines in a rugged part of Wyoming this last winter, an Exxon employee operating one of their SnowCats was caught up in a small avalanche and the SnowCat slid several hundred feet into the bottom of a very steep ravine.

Thankfully, the employee was able to escape unharmed, but the SnowCat was stuck in the bottom of the ravine and could not be driven out.  This man’s company had been hired to somehow retrieve the stranded $250,000 piece of equipment.

Initially, they tried using several other SnowCats to tow it out.  No dice.  They tried digging and creating a channel for it to climb.  Still, no dice.  The only remaining option was to contract a large industrial helicopter to fly in and lift the 20,000-pound SnowCat out of the bottom of the ravine.

The recovery mission was going to cost in excess of $100,000, and the man was blown away that Exxon had no issue going through with it.

I chuckled and reminded him that Exxon, as the world’s largest oil company, probably made $100,000 every couple of minutes and that although $100,000 is certainly a lot of money, it wasn’t even a rounding error on Exxon’s annual financial statements.

Out of curiosity, I pulled up Exxon’s financials on my phone there at the dinner table and did some quick math.  I was way off in my guesstimates: Exxon doesn’t make $100,000 every couple of minutes – they make $415,921 every single minute of the year, or almost $25 million per hour!! I was way off.

Digging deeper, turns out they’re not even the biggest:

As mind-boggling as the numbers above are, one entity completely smashes everyone else: