Corona Update #2, And Something About Oil

Over the weekend I penned an update on the economic impact of COVID-19.  Little did I know Saudi Arabia and Russia would pick a massive oil fight with each other later in the weekend.  More on that in a minute.

First, an update on the economics of COVID-19.

Let me start where I did last time: no one knows.  And we as humans hate not knowing what’s going to happen.  We don’t like when things are out of our control.  And it’s this fear of the unknown that’s causing so much anxiety.  Furthermore, this is perhaps the first major virus in the age of social media (the truest combination of ‘going viral’), and the constant blare of noise from all media outlets is exhausting.  I think we’re all ready for a break from anything #Coronavirus.

And I’m still not any more of a virologist, epidemiologist, or immunologist since we last spoke, but let me speak to two updates economically.

The issue has evolved from a supply-side issue to a demand-side issue.  What that means is this:

Initially, this virus was the culprit for knocking so much of Southeast Asian manufacturing offline.  That didn’t mean too much for everyone else outside of ground-zero, other than some temporary delays in sourcing stuff manufactured there.  Think computers, cell phones, car parts, etc.  This is an interruption to the supply-side.  Consumers are doing great, they just can’t get the stuff they want to buy.

However, as the virus has spread outside of Southeast Asia, and people have been quarantined – either voluntarily or involuntarily – a different issue has emerged: demand-side interruptions.  When I’m sick, I don’t spend much.  When I’m not sick but asked not to venture out unless I really need to, I’m not out in the economy spending as much as I did before.

And since one man’s spending is another man’s income, a decrease in spending from one party can lead to decreased income to the 2nd party, which means the 2nd party will likely curtail his spending with a 3rd party, which means the 3rd party will have to curtail his spending with the 4th party and so on and so on.  Unlike the supply-side interruption from before, we now have an interruption to the demand-side of the equation.  Stuff is available to buy, but no one is out shopping.

And this is the very definition of a recession – instead of aggregate spending (all of us combined) increasing this quarter (as it has for the last 43 quarters straight), aggregate spending decreases this quarter.  Hence the current economic concern: what kind of top-line revenue impact will all of these quarantines have?  A 5% reduction?  A 10% reduction?  At this point, no one knows.

And if top-line revenues come down, so do bottom-line profits.  And if profits come down, so do valuations.  This is exactly what has caused the dramatic decrease in equity markets over the last 2 weeks.  Investors are trying to price in their best guesstimate as to what kind of impact on profits this virus will have before it’s over.  If this virus is temporary, then profits rebound, and valuations come back up before too long.  If it’s here for a while, then decreased profits and decreased valuations will stick around for a bit.

Which brings us to this weekend’s oil fiasco, and to today’s large drop in equity markets globally. But we need to back up a little bit to understand what happened this weekend.

Over the last 10 years, US oil production has increased substantially: 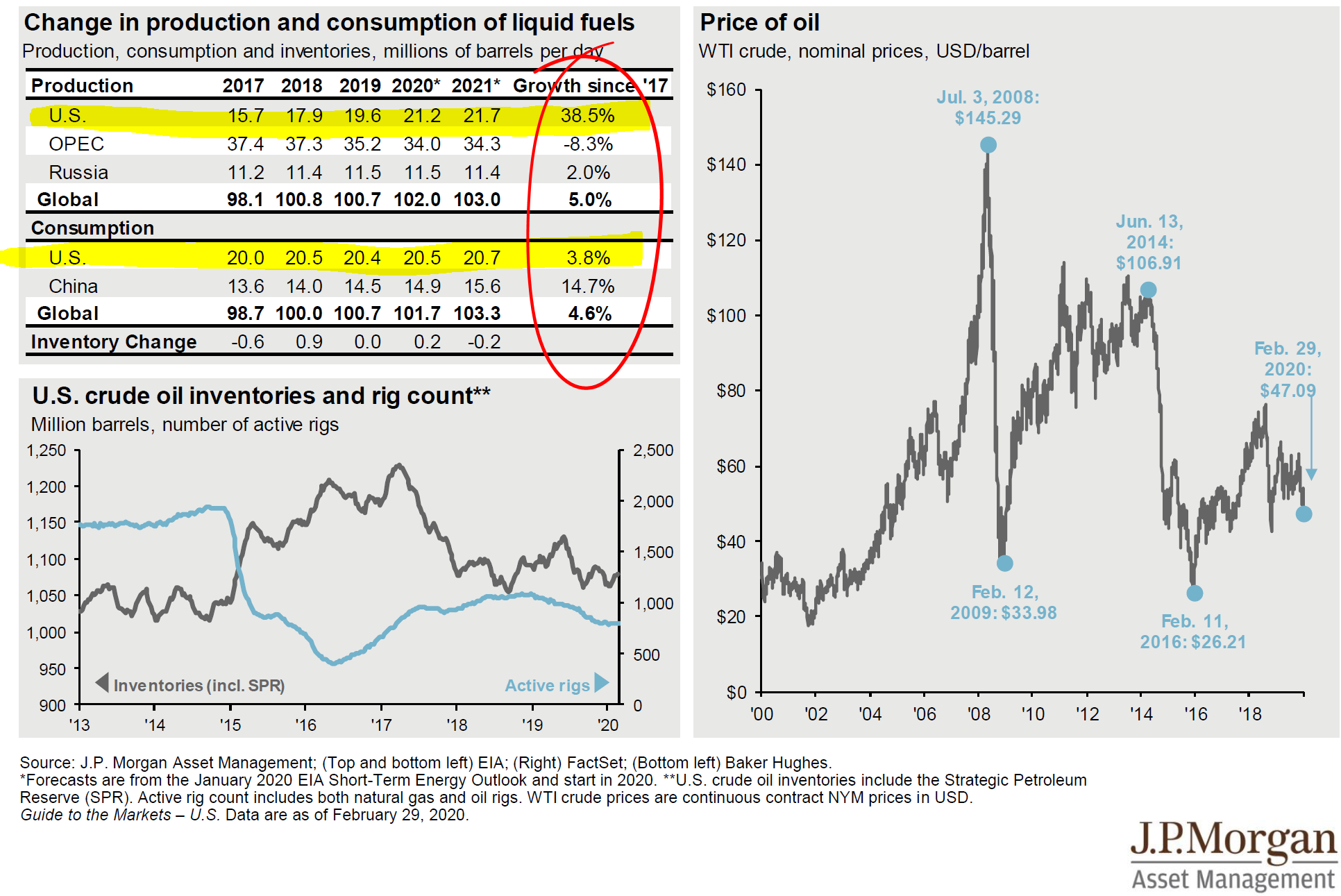 It’s hard to see in the data above, but November 2019 will go down as a milestone in America’s history.  In November 2019, our daily production eclipsed our daily consumption, meaning we are net exporters of oil now.

Yes, you read that right, the US is now a net exporter of oil: 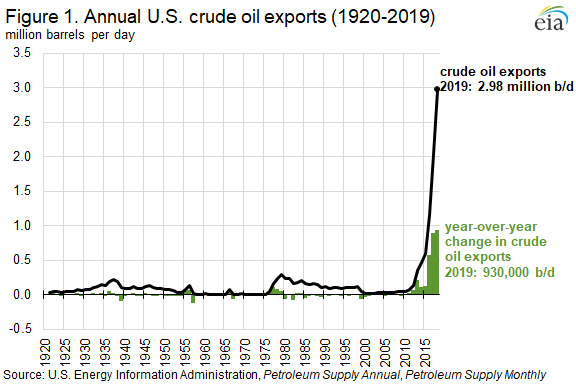 This alone has fundamentally changed the balance of power globally.  Think about how long we’ve been in the middle east to promote stability in the region.  But from an economics-of-oil perspective, things have changed.  Dramatically.

In addition to now being a net-exporter of oil, the US has also now become the number 1 producer of oil worldwide: 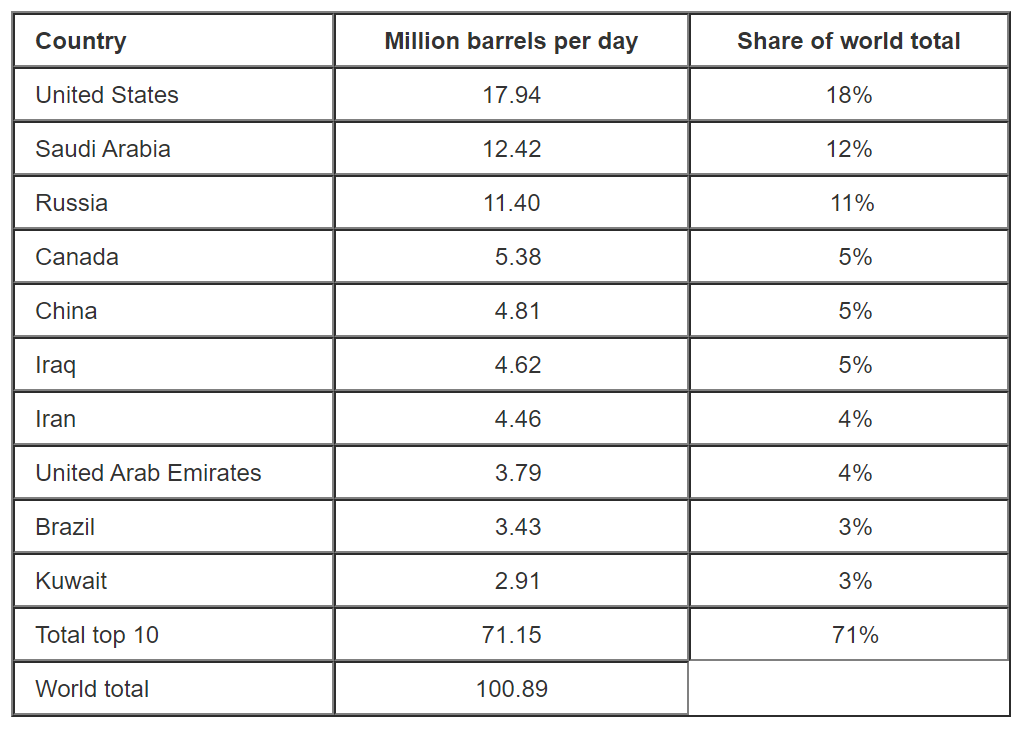 Yes, you also read that correct.  We are now #1 in oil production.  This brings us to this weekend.

In the face of declining oil prices last week from COVID-19 overhang, OPEC+ met to agree on cuts to production in order to keep prices elevated.  But the meeting didn’t end well.  Long story short, Russia balked at cutting production out of fear of losing more market share to the Americans.  In response, Saudi Arabia called Russia’s bluff and both sides stormed out of the meeting without an agreement, blowing up OPEC+ for the time being.

Not only did they not agree on production cuts to keep prices high, they each went back to their home countries and told their country’s oil producers to turn up the volume and pump as much oil into the market as possible.  They have started an extremely high-stakes game of chicken with each other, seeing who will blink first.

Go back to your Econ 101 class: if demand is down, and supply goes up, where do prices go?  Down.

Or in this case, waaaaayyyyy down.  Oil went from $50/barrel on Thursday afternoon to $35/barrel by the time US markets opened up this morning, a ~30% drop in less than 4 days.  That hasn’t happened since the Gulf War in the early 90’s: 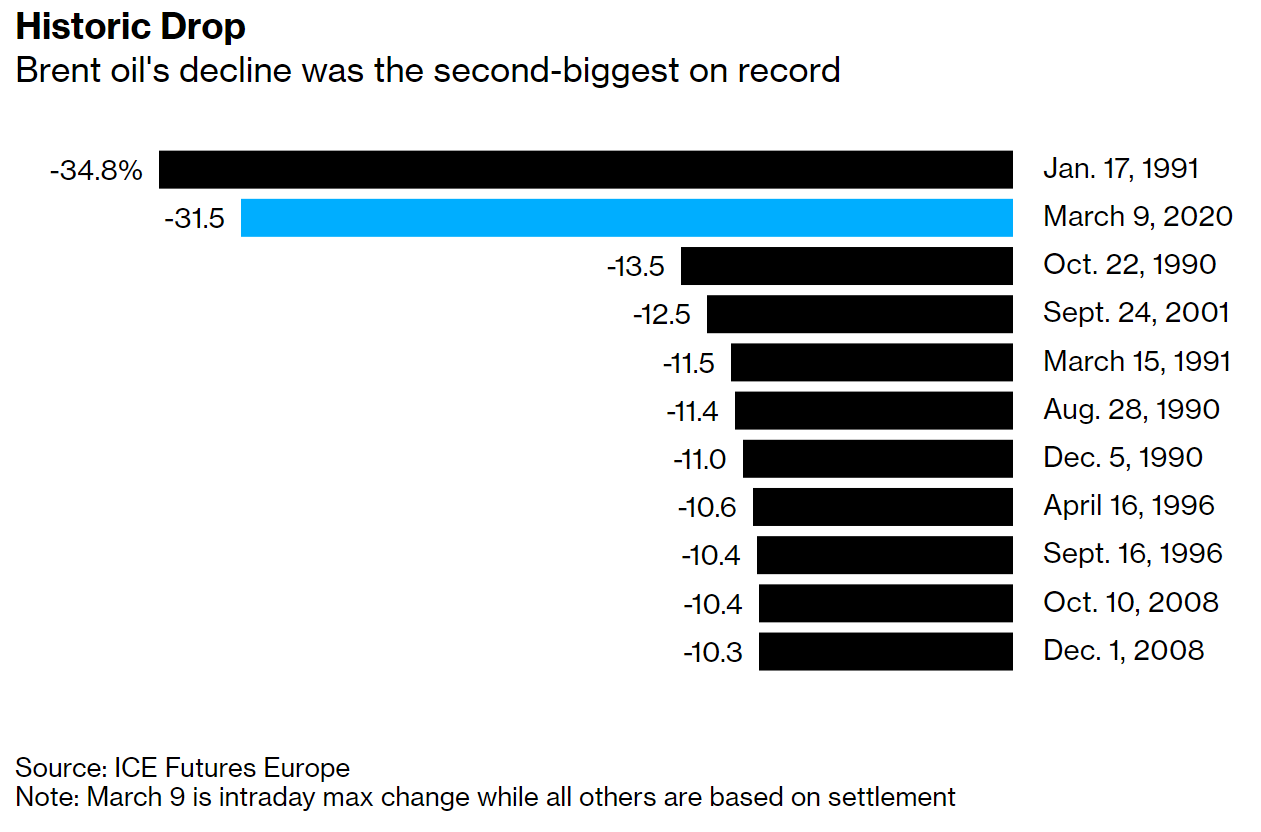 Declining oil prices are great news when I fill up my car at the gas station.  But it’s horrible news for Shell, BP, Exxon, Chevron, and all the employees and other downstream companies that keep the oil giants going.  If Shell’s revenue goes down, layoffs arise, vendors are asked to reduce their prices, and the effects go on down the line.  One man’s spending (or lack thereof) is another man’s income (or lack thereof).

More importantly, oil is considered one of the core economic indicators.  Layer a hot-mess in the oil patch on top of the hot-mess of COVID-19, and you can see why equity markets took such a nosedive today.  Too much uncertainty and investors flee to safe-haven assets like US Treasuries and the like.

So, what do we do about it?

The best financial advice I can give you is to turnoff the media, both social and traditional.  Their paranoia and anxiety are way more contagious and damaging than Coronavirus.

With all this extra time from no media consumption, go to work.  Be productive.  Your production puts money in your pocket.  Money in your pocket can be spent to live your lifestyle, which spending then becomes someone else’s income.  Each of our individual spending aggregates into a national income.

Assuming you are living within your means, and have a solid financial plan in place, there is no need to live in fear of what’s currently happening (speaking only to the economics here; better talk to your healthcare provider about the virus itself).  It’s an unpopular message, but we’ve been here before, and we’ll be here again.

In our conservative, momentum-based portfolios, we’ve trimmed some of our positions and moved those funds to short-term, high-quality bonds to protect investor capital until the storm subsides.  In our aggressive, buy-and-hold portfolios, we bought again today.  It will be messy for a while, but we’re still comfortable with the long-term outlook.

But, in all fairness, it’s been a while since we’ve had this kind of volatility.  It can be scary.  If you’d like to meet face-to-face or at least schedule a quick phone call to ensure you’re still on track, please call or email and let’s get something on the calendar in the next week or two.  We’d love to hear from you.